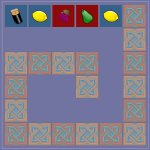 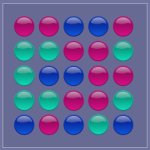 A popular game consisting of finding pairs of similar cards. The player reveals 2 cards. If they are the similar cards (forming a pair), they will be removed from the board, if not, they will be flipped back (after about 2 seconds). The player's is to remove all cards in the least possible number of turns. In the game the number of incorrect turns is counted. The game is available in two versions: the smaller board consists of 42 cards, the larger one of 56.

The time has come to adapt this game to new realities. Especially for smartphones I have prepared a mobile version. The number of cards remains almost unchanged, but we have 40 fields instead of 42. In return, the screen of your mobile device will be used more effectively. A screen with a diagonal of 5"or larger is required for comfortable playing.

The Memory Game also called Pairs The game called Pairs was created at the end of the 19th century. Its creation is attributed to the Pelman Institute in London. The Memory Game is intended for all people who want to improve their memory, regardless of their age, although this game is especially recommended for young children. In its original version the game is intended for two people. 52 cards (or 54 in the version with 2 jokers) are required for this game. The cards are placed in 4 rows of 13 cards (in the version with 52 cards) or 6 rows of 9 cards (in the version with 54 cards). Each player alternately reveals 2 of his/her cards. Cards are considered similar if they have the same rank and colour (the colours are only black and red here). The person who successes in guessing the pair takes it from the table. The person who will have the most cards after taking all the cards from the table wins. Since the computer version is designed for 1 player, the rules have been slightly changed.
mail: marcin@zagrajsam.pl
2006-2017 Created by Marcin Juchnicki. All Rights Reserved.